This is sort of a curriculum vitae for my creative work with the sims games.

In 2000, I first encountered the Sims in a magazine ad. I was  fascinated by the ad which showed different sims and their professions. So I bought the original Sims game with my pocket money.I was thirteen years old and thrilled! It was the first computer game that I owned myself (not counting the games that my brother had and sometimes let me play).  I bought every expansion pack after that.

I first tried to create custom content in the sims 1. I used MS paint to draw glasses or colorful highlights on head textures (they actually looked as horrible as they sound).
It was still incredible for me to see the results on sims in the game!


After sims 2 came out, I created walls and floors and simple clothing recolors. I started to use more powerful graphics programs that would handle layers, making it possible to create clothing recolors that had folds in them, not just flat textures. I slowly started to learn to use them.

By the time Sims 3 came out, I was intent on creating lots of CC and also of sharing them one day.

I created this pattern with the TSR Workshop Pattern Creator and Photoshop.
I used various photoshop brushes and named it "Floral Leaves".


Unfortunately, I didn't know that the red channel, being the background, had to be completely white to be recolorable.

So instead, I set a fixed, yellow background.

Later, I adjusted and retouched the pattern to be fully recolorable.

I also renamed it to "Blossoming Tendrils".

Due to the way it was tiling, I did not use it much, however.

It had empty areas in it that looked a bit weird:

My pattern creation skills did improve, however :)

Soon, I was creating lots of patterns and also wrote some tutorials.

I quickly expanded my experiments to the latest discoveries, mostly I was trying out different tutorials at Modthesims.
I successfully edited peggy’s default skintone (all the rage back then) and removed the red nailpolish on it for personal use.

I also tried to make my own skintone edit, but was never remotely satisfied with it (though I still have models who use it, imperfect as it is).

I learned how to edit clothing textures by poking through other creator’s files and changing things to see how they worked.
I mostly removed overlays and made them recolorable instead.

This really helped me to get an understanding of how the textures worked.
I also dabbled in creating contacts, makeup and eyebrows.

My first clothing creation of my own was a dress, inspired by a dress I saw in the online shop Miss Selfridge.

I created it in June 2010. It was for female sims and created using photo textures.

I even made a presentable image intended to be used for uploading the creation, but decided I didn’t want to be known for photo textures.

This was made before custom poses were available:

In July 2010, I participated in my first sims 3 contest at the MTS forums. It was the Foundations Contest.

You can see my entries for the different rounds here:

I had a lot of fun, but building with ts3 was never my strong suit, so I gave up on it in favor of CC creating ;)


For the first time, I felt confident enough to share my content with others.
I haven’t had a website, though and dreamt to have an upload at Modthesims. So I worked up the courage and submitted those jeans…

Consequently, my first ever CC upload in the Simming Community were the  Antik Denim Inspired Jeans at Modthesims in August 2010.


I was so proud when MTS accepted it, because I knew of the high quality standard.
For me, this was like a test to see if I was ready to share my creations with the world (and no rotten tomatoes were thrown my way.)

Sadly, my graphics card at that time did not do justice to the creation.
Have a look at this new image instead:

I created my first mesh ever thanks to the awesome meshing lessons in the Blackpearlsims forum in September 2010.
Jonesi made a proper online class to teach a bunch of meshing-newbies like me how to mesh a simple coffee table.

I tried to learn meshing before with tutorials, but struggled to comprehend all the complex steps.
This meshing class was a life-saver! I am so happy that I had the chance to participate in it and I am still very grateful to Jonesi.

A month later, I started to create clothing meshes. Simple deformations, nothing fancy, but it made a huge difference. I taught myself how to edit clothing uvmaps and started practicing. It took me a long time to make a mesh that was good enough for my tastes to be published, though!


In June, 2011, I launched my own website, simlicious.jimdo.com that is hosted on jimdo.
I started with a free membership and upgraded to a pro membership after half a year to get my short domain without the .jimdo in it.

I started with the publication of pattern tutorials and then some pattern sets followed, then special contacts for glowing vampire eyes, makeup and clothing retextures…

I created my tumblr blog, aka simblr in february 2012.

It is now my favorite simming community!

I have met some incredibly awesome people there.

At my simblr, I am very active.

I have exclusive downloads, aka follower gifts,

tons of tutorials and more!

You can also get to know me better

and easily talk to me if you follow me there.

My first published custom mesh was a pair of moccasins at this website on may 2012:

I further strengthened my meshing skills by participating in the Next Fashion Artist contest from may through august 2012.

It was quite a challenge to create five extraordinary meshes under pressure and to a given theme.

It was demanding and I loved it! I grew so much as a creator during that time.

Since those meshes were still early meshes and the Meshing Toolkit wasn’t yet released, there were some difficulties and they are not as perfect as I’d have liked them to be, but all are playable.

I have since updated some of those creations:

The updated Petticoat Party Dress is available at Modthesims, as well as the Elven Fantasy Robe.

I am still very proud of my achievements and upon winning second place! 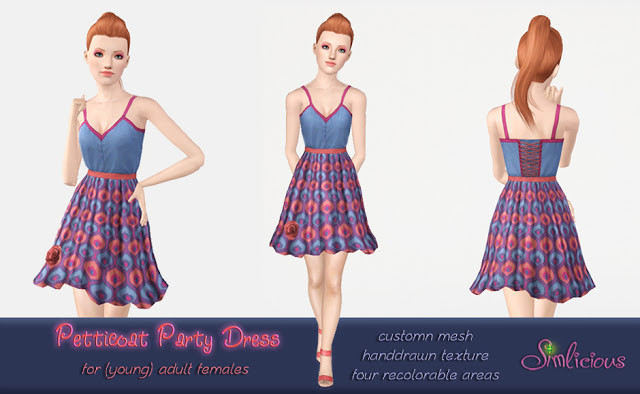 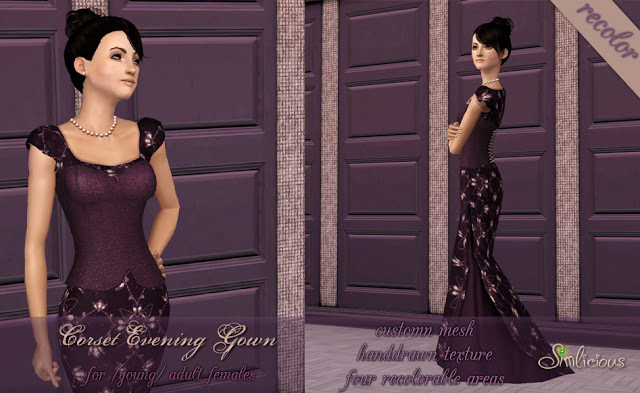 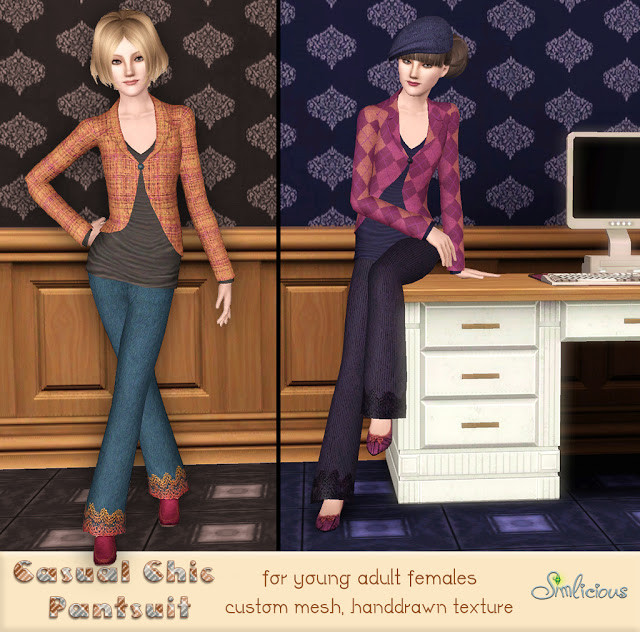 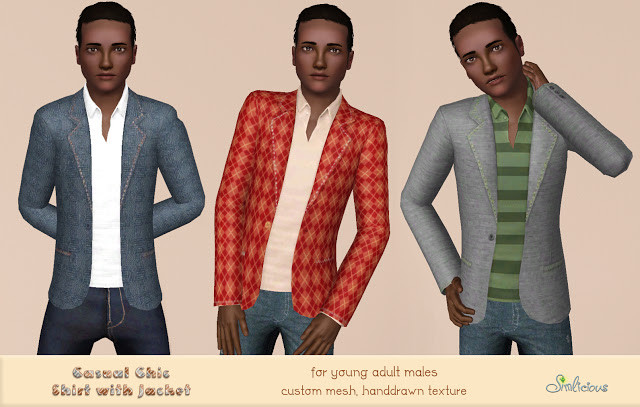 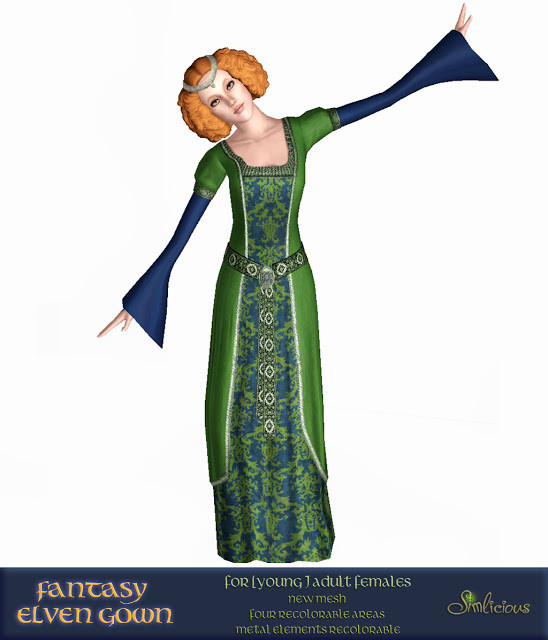 
From August 2013 to early 2015, I was part of the team at Blacky's Sims Zoo that designs custom content to be featured in the German Official Sims Magazine.

I was very lucky to work together with such wonderful people in an inspiring, creative team!

The work for the magazine was stressful, but I loved the challenge. It is very flattering to see your own creations in a printed magazine!

Sadly, the magazine production was canceled in October 2015.

Click here to see a pdf excerpt of the bridal fashion article of  issue 3/2014.

A design update for my website
In August 2015, I decided to redesign my website to give it a fresher, simplistic, modern look. I also updated my facebook page design and my tumblr theme. You can also learn more about me now!

Now, whenever I have time to create on the side, I like to create pattern sets, mesh and texture clothes and create accessories.

I spend a lot of time at my simblr, getting to know other awesome simmers.

I look forward to the new challenges that the sims 4 will present to all creators... figuring out stuff, learning the new ways of creating content. I have been waiting for the new tools to evolve before I delve into the creation of Sims 4 CC!

If you have questions, feel free to get in touch - my askbox on tumblr is always open and you can also contact me through the contact form on this website. See you around :)